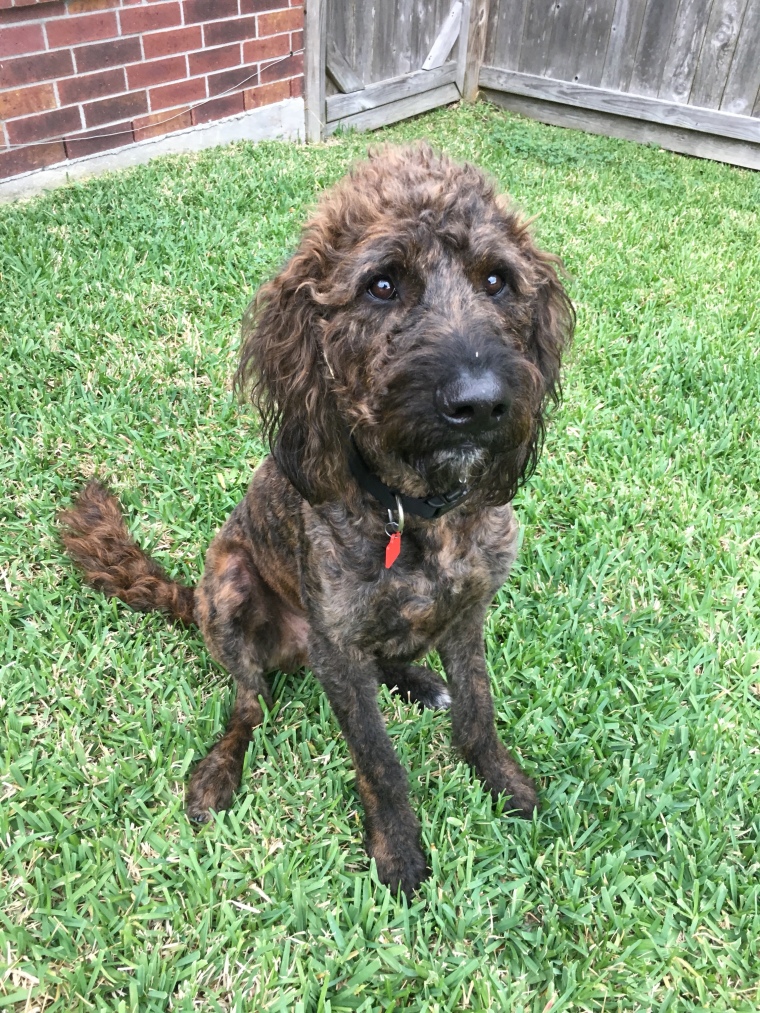 Name: Dexter aka Dexter Doodle aka Dexie Doo aka Dex, he now goes by the name Mike the Tiger aka Mike aka Mikey

Time in our care: three weeks

How Dexter ended up with us: Dexter was an owner rehome.

Adventure: Dexter’s big adventure was taking a walk at Exploration Green and then going to get dinner afterwards. He was completely exhausted afterwards. Because Dexter’s world was so incredibly small prior to coming into foster care he was scared to do a lot of things and everything was one big adventure! Car rides! A walk around the neighborhood! These were all new to him! All he knew of the world was his old backyard. Taylor and I worked very hard with him on getting him to love the car rides (copious amounts of treats) and he was (and still is) pretty wild on leash!

Personality: Dexter is the biggest love bug. He loves his humans and lives for human attention and love. He loves to be loved. He is the biggest goofball with his long legs and skinny waist. He reminded Taylor and I a lot of our precious Briggs. He is a good boy who adjust quickly and wants to please. He also loves to romp around!

He was also a very unique looking dog with his beautiful brindle coat. They are now referred to as his tiger stripes! Whenever someone would see him they had to come over and pet him. He loved all the attention that’s for sure!

Queen Sophia Rose and Gonzo’s thoughts: Gonzo while always a gentleman, wasn’t the biggest the fan of Dexter. Mainly because Dexter treated Gonzo as a hurdle. He would run full speed at Gonzo and then fly over him. Poor Gonzo and his short legs 😦 Check out the video! Sophie didn’t hate him because he would chase her around and Sophie loves to be chased. However, she doesn’t like it when other dogs steal her human affection so we did get some death glares from across the room when Dexter would get his beloved belly rubs!

Funny story: So many!

My favorite is the time he jumped over Gonzo and crashed into the side of our brick home and ripped off the hose and hose hanger.

By far his funniest habit was getting on the couch or getting up into bed or getting into the car. I’m not sure if I mentioned this but Dexter is huge, he towered over Gonzo. While he didn’t have any trouble jumping OVER anything or anyone he struggled with the concept of jumping ONTO or INTO something. He just couldn’t figure it. He would put his two front paws on the couch or the bed and then slowly army crawl his way up. One of the best nights of my life is when he army crawled onto my lap while I was watching TV on the couch! Biggest lap dog ever! We also always had to lift him up into our vehicles! Which was so funny because he is HUGE!

We also made him wear bunny ears on Easter! ha!

The gap between his two front teeth also made us laugh!

Adopters: Dexter (now Mike) landed the absolute best home in Austin! He has a beautiful giant schnauzer for a sister, named Mavis. He has a wonderful mom who loves him so much it brings tears to my eyes. He is such a lucky guy who so deserved the best life ever and I’m so happy he got it! Bonus points: he now has an Instagram account, @mikeandmavis, so I get to stay up to date on all of his goofy behavior and awesome Austin adventures! Go follow along on his journey!