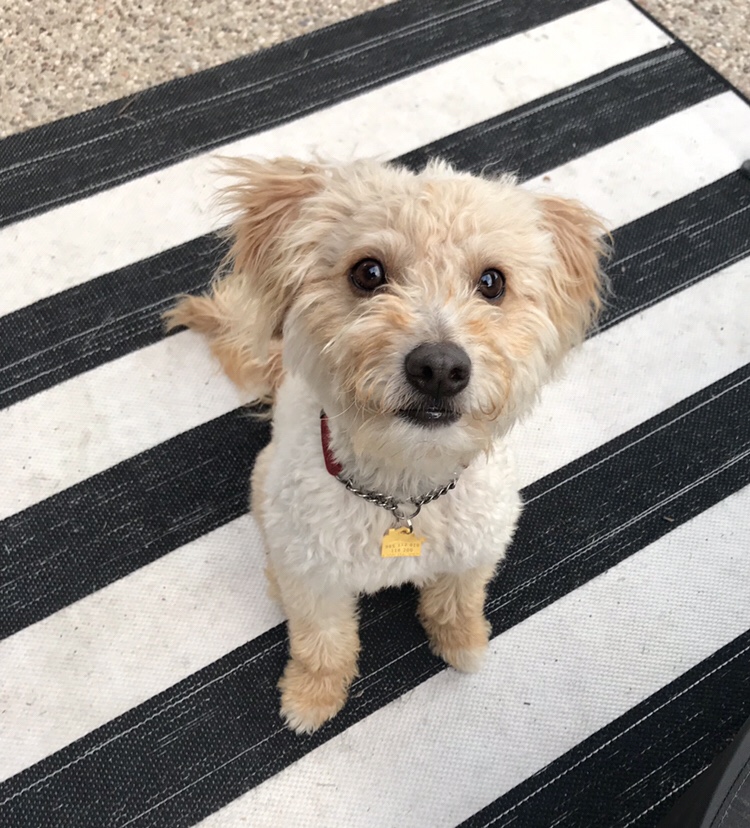 Time in our care: 2 months

How Brodie ended up with us: Brodie was pulled by IDOG from a shelter in Austin. He was completely covered in mats and needed to be completely shaved down. He either spent the first year of his life in a backyard or roaming the streets. He was then adopted but it didn’t work out so then we got to foster him!

Adventure: While Taylor was in Moab I took all THREE dogs to Austin with me! Now that was an adventure! Yikes! He got to spend sometime at Aunt Alyse’s coffee shop and walk all around Austin.

He also got to go on a little trip to Baton Rouge! He was such a good boy in Baton Rouge and everyone loved him!

Personality: Brodie is the wildest dog we have ever fostered. He spent the first several weeks tethered to either me or a piece of furniture. He also spent those first few weeks wearing a diaper. Ha!

He was so unaware of domesticated dog norms and had to learn that being calm and behaved meant he could have more control. Acting like a wild man was not how he would get his way. Brodie is very stubborn and can be moody! Ha! Just like me! Brodie loved me more than possibly any other dog has in my entire life. He was my biggest fan but he also would try to walk all over me! I don’t think so sir! Although, I would allow it, at times, because he’s so cute and he can usually get away with almost anything!

As you can tell, we spent a lot of time working with Brodie to make him adoptable and he sure is a quick learner!

Initially, we didn’t know if our skill set would be enough to curb Brodie’s bad behaviors but I am happy to stay we stuck with it (after an extensive talk with the most fantastic trainer, thanks Kris!) and Brodie improved every day he was with us. He made us so very proud!

I actually had to leave him before he was adopted. He has spent the last 3 weeks home with Taylor! I’m happy to report he is now best buds with Taylor and has improved more than I ever thought possible. Taylor even took him to work most days! He is no longer scared around men and looks for Taylor’s approval in everything he does. The only issue we still had left to work on was his dog reactivity when on leash! 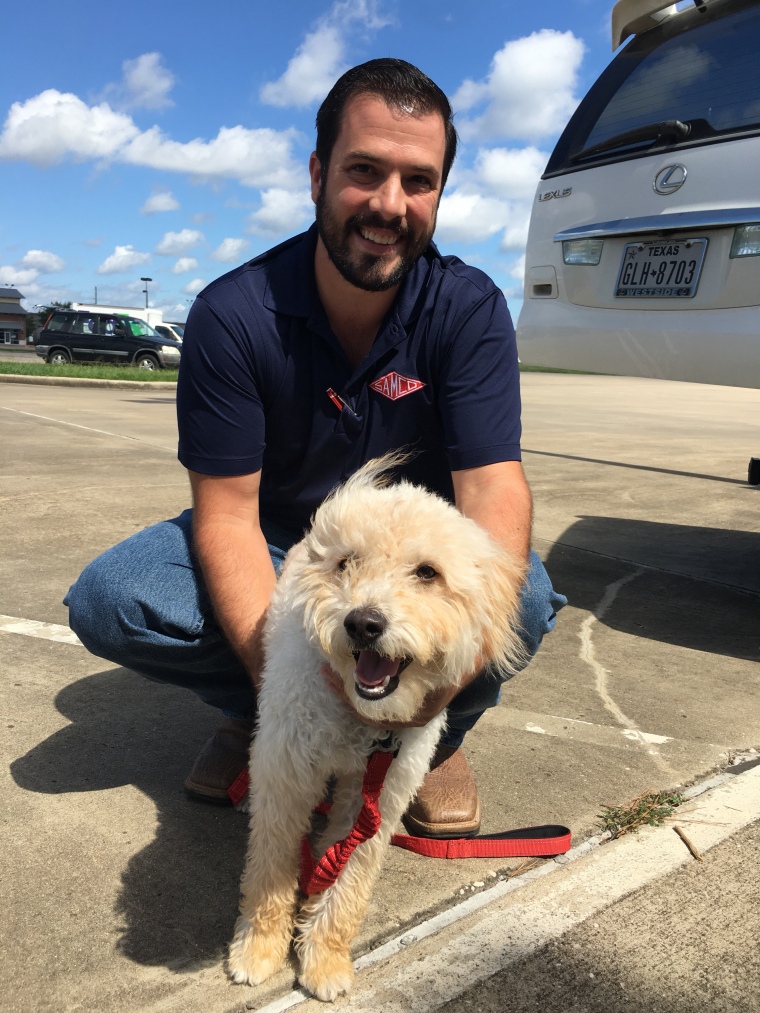 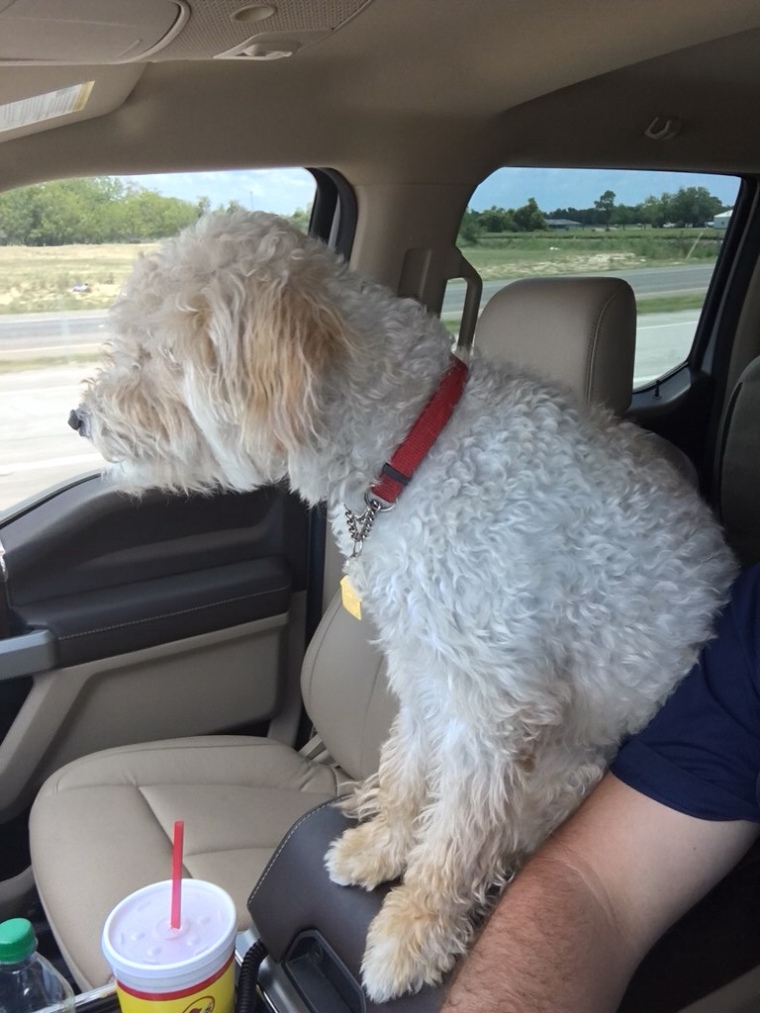 Queen Sophia Rose and Gonzo’s thoughts: Despite his craziness I wouldn’t say that Sophie or Gonzo disliked him. As soon as they told him they didn’t want to play anymore he would walk away and play by himself. I will say he has no concept of personal space and would crawl all over both Sophie and Gonzo and it was hysterical!

Funny story: His bunny hops all around the house and backyard! He would gold medal at any agility event!

How he would parkour off of anything, anyone, or any dog!

That one time he escaped from his kennel and greeted me at the backdoor.

The look of surprise on people’s face when he would fly onto their lap.

How he would happily play with his bone for hours. Toss it up into the air and catch it!

How he stole every. single. toy. out of Gonzo’s mouth. No remorse. Poor G-money.

The time he stumbled head first into the pool. He clawed his way out quite quickly!

Our all time favorite moment with Brodie is when he purposely chose to take a swim with Gonzo and Taylor! Best moment!

Adopters: Brodie (now Brody) landed in the absolute BEST home! His journey to his new home is pretty spectacular! His new mom is located in Rhode Island.

On the morning of June 27th Taylor dropped Brody off at one of the P.E.T.S. LLC transport locations. From there Brody was loaded onto a semi truck with about 100 other dogs and off to the Northeast he went! On June 29th we got a nice surprise as this organization does a live Facebook feed during their Friday morning wellness walks! About 1.5 hours into the live feed Brody showed up for his walk!! So much fun and so many tears! Putting him on the transport truck was so difficult because we couldn’t explain to him that this 3 day Journey was going to be worth it! After seeing him on the video it offered such a sense of relief seeing that he was doing okay! P.E.T.S. LLC is an incredibly organization that offer superior transportation for dogs from the south to the northeast! They transport 150 dogs or more every week! Incredible! Their kindness with and care for each dog is so apparent! If you are ever looking to donate to awesome organization or need to transport a dog this is the one!

Brody will be meeting his foster mom, Stacy and his new brother Ace on Saturday morning! Stacy is awesome, she already has a trainer for Brody! We have talked for hours and she plans to continue on with all the training we have started! It will be a little rough in the beginning but I know this is the perfect home for our Brody Bro!

#44 – We love you so much Brody. We have never put so much work into a dog and it has been THE most rewarding experience! Brody you taught us so much about raising a dog and just about life in general. Thank you Brody! 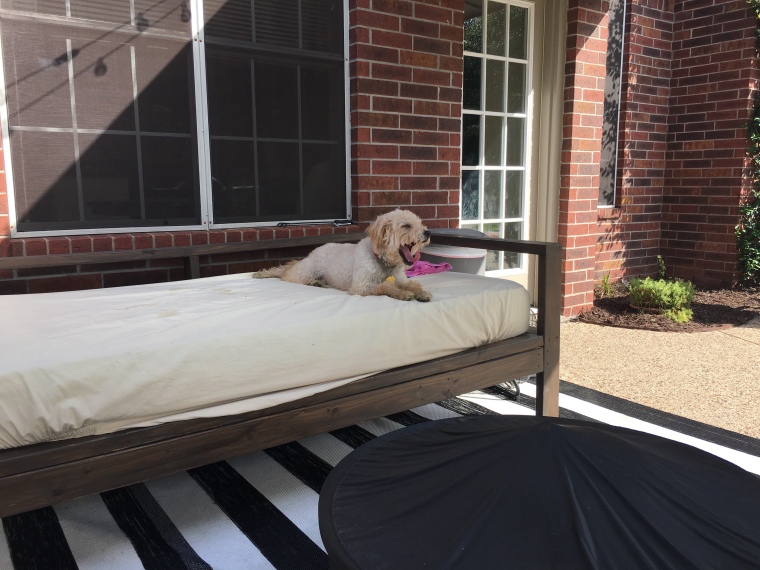 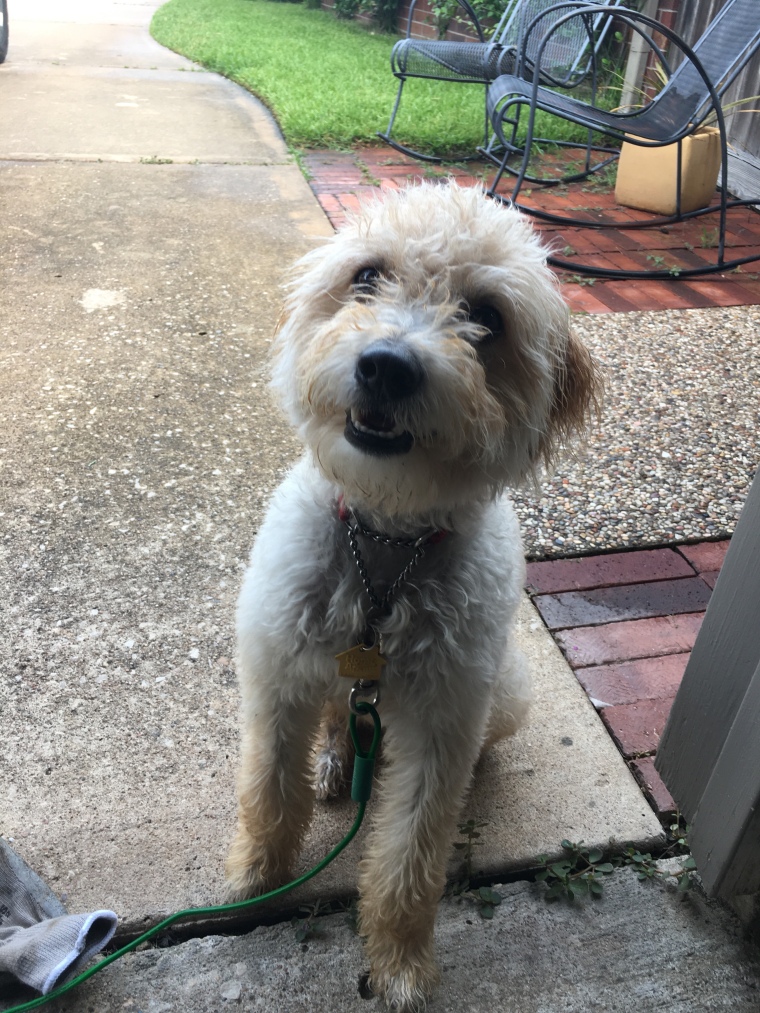 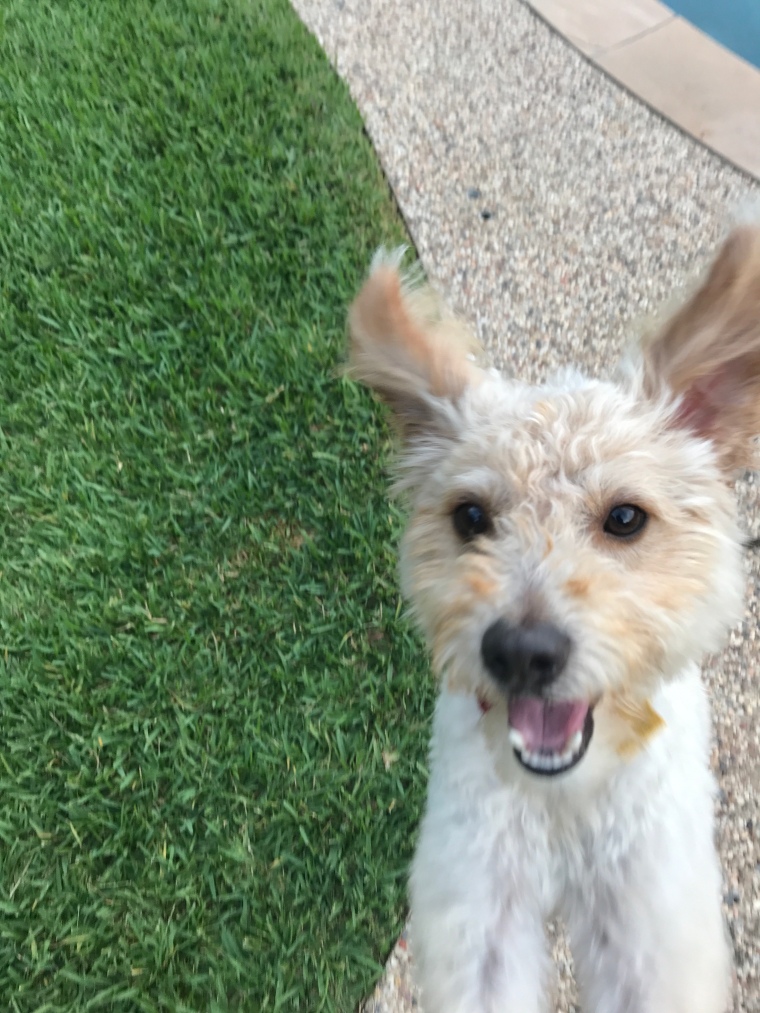 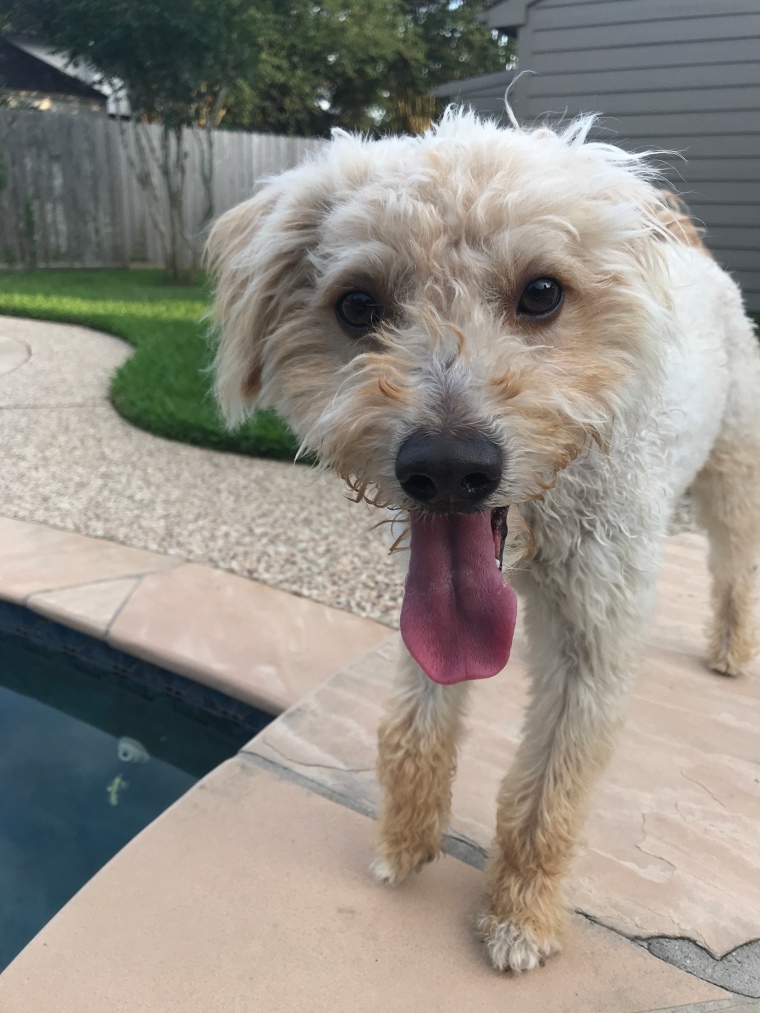