Following my amazing sea plane ride I had some not so amazing excursions. Luckily, we were able to find the humor in each!

For the first part of my disastrous 24 hours my sister and I headed out to Agate Beach. Kati had been telling me about this beach for months! It is her favorite and we went out there for a good round of fetch and a beautiful sunset!

Disaster #1 – On the drive there I noticed Titan, Kati’s oldest dog, chewing on a beach towel. I climbed into the back and took it away from him. As I was looking at it I saw he had eaten some of it, wanting to know how much, I pieced it back together to find out that he had eaten about 1/8, if not more of it. Kati immediately pulled over, jumped out of her car and laid it in the road to see if I had properly pieced it back together! I had, so we rushed to the gas station and bought hydrogen peroxide, delicious canned dog food and a bowl. Titan must have thought he was pretty special getting such a wonderful treat while all the other dogs were stuck in the car.

Within minutes the hydrogen peroxide did the trick and the beach towel was coming back up! Poor guy didn’t know what to do!! Needless to say, for the rest of the night he was a drooling mess! But better than the alternative!

While Titan was busy throwing up I had a little photo shoot with all the puppies in the field with the lupins!! 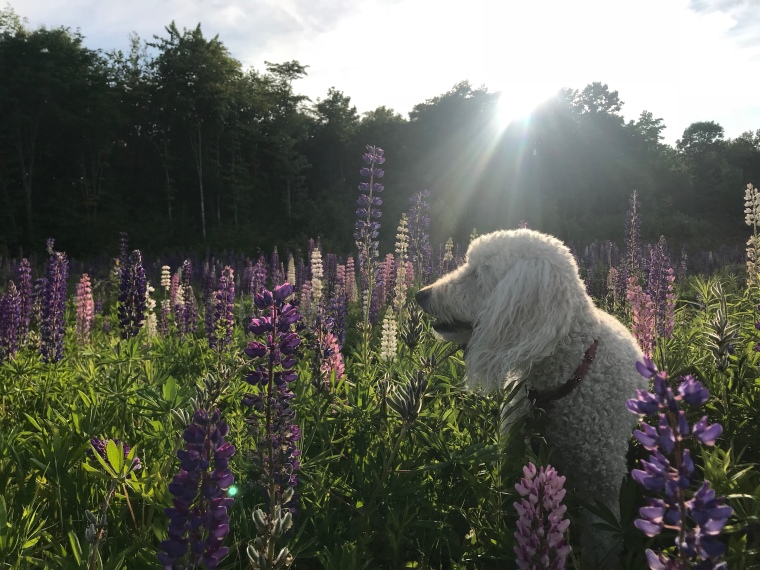 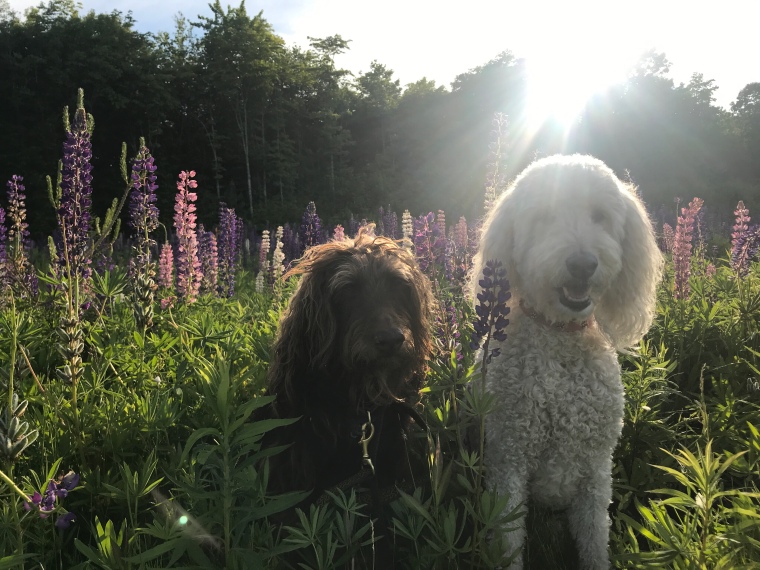 We decided Titan was ready to rally so we headed to the much anticipated Agate Beach!

Pulling up I could see why this is Kati’s favorite! It’s a beautiful rocky beach on the westside of the peninsula and is the perfect place to watch the sunset over beautiful Lake Superior!

Disaster #2 – However, upon further inspection we realized all the sand had been washed away, the shoreline was covered in washed up branches and other debris and worst of all it was no longer walkable because the water levels had risen so much! There were also bugs and spiders everywhere! I get itchy just thinking about it!

We attempted to make the best out of the situation because the sun setting was still pretty and Gonzo was ready to play some ball! But we ended up not staying long because we just couldn’t take all the bugs! 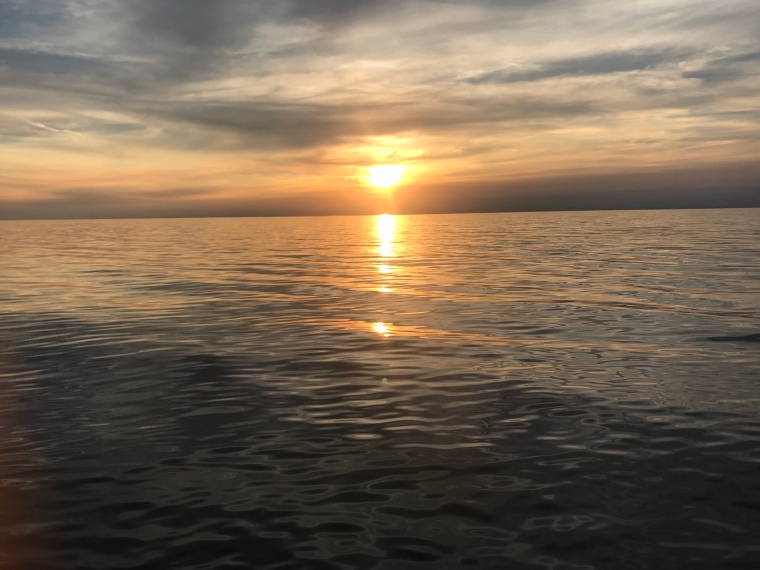 Kati was disappointed but at the end we had a good laugh!

The following day I decided I wanted to go check out some waterfalls about an hour away! So the dogs and I headed out to O Kun de Kun Falls!

The pictures I had seen of it were gorgeous and you can actually walk behind the the falls and play around on all of the surrounding rocks! Right up my alley! Here our some pictures for reference! 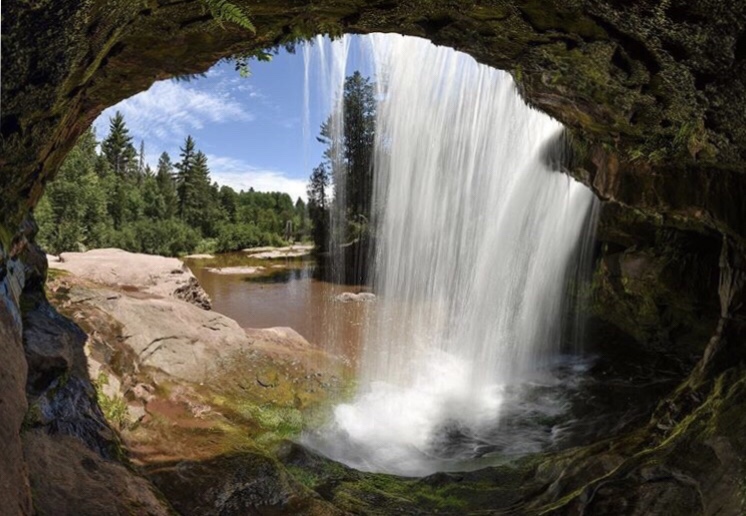 Can you see why I was so excited?

Disaster #3 – Well, the hike in wasn’t fantastic because of all the rain the week before the trail was extremely muddy, we were up to our ankles in mud! But we just trekked along! #mustseewaterfall Luckily, through the really swamping parts boards had been laid down! 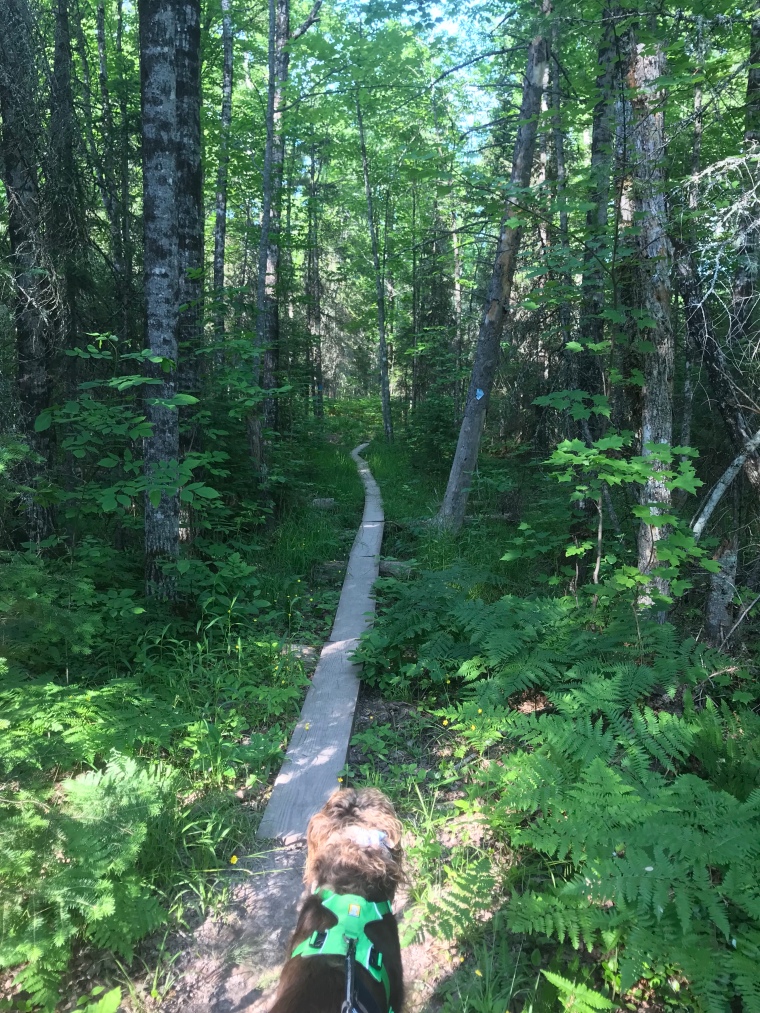 I kept Sophie and Gonzo leashed up! Which normally works out fine. That is until Gonzo decided to unexpectantly veer off the path and down a hill covered in slippery pine needles. I should also mention this hill ends at a cliff that overlooks a rushing river! My life flashed before my eyes as I was barreling down the hill reaching for anything I could. Thankfully, I was able to grab onto a pine tree before we went sliding off the edge of a cliff! Now that I think about I wonder what Sophie was doing? Hmmm it was all a blur!

No worries, I didn’t get hurt too bad! Only a badly bruised hip, some scratches and some splinters in my palm! Thanks Gonzo! Love you! This is his look of remorse face! Can’t be mad at him for too long!

Anyway! That wasn’t even the real disaster! Check out the waterfall! 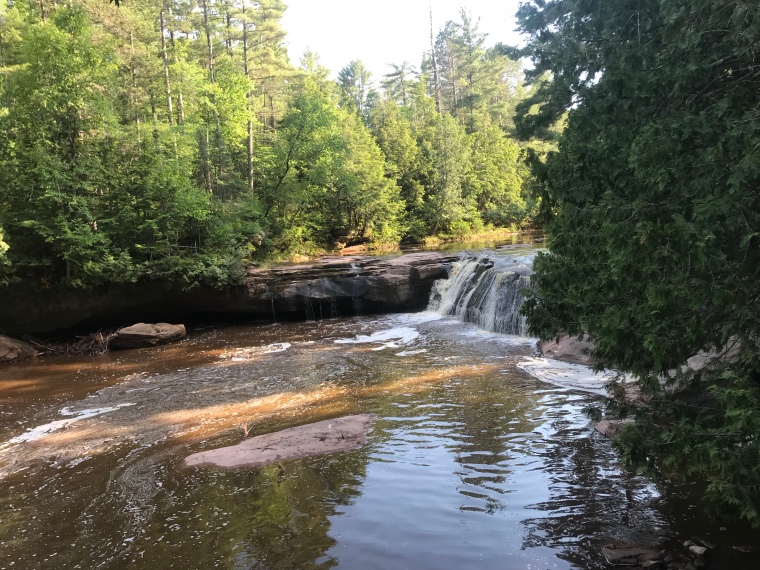 Completely flooded out! Nothing to walk behind, brown, muddy water and no rocks to jump around on! We hiked out here and got covered in mud for this?! Still pretty and like Taylor says, still better than Houston! But still! It didn’t even occur to me that the water levels would be this elevated! I would estimate about 6 feet?

Well at least we got to meet several really nice folks out on the trail and all had a good laugh about the condition of the falls!

Next up on our waterfall tour we headed to Bond Falls! Which is said to be one of the most picturesque falls in all of the Midwest! It is on the Ontonagon River and is accessible to all! There is a really nice path to the falls and boardwalks surrounding it. Normally, I hate when things are so nice and built up but this was well done! The boardwalk offers several different viewpoints of the falls and fits in perfectly to the surrounding natural beauty! This experience was definitely not a disaster! These falls were gorgeous and pictures do them no justice! Highly recommend checking this place out!

Well that’s it for the disasters! Not really so bad! Just like life, you gotta roll with the punches!

#45 – I wanted to thank everyone for the awesome support with Brody Bear! He made it safely to Rhode Island and is doing great with his new mom and new brother!

#46 – I’m thankful for situations not going as planned. It teaches the valuable life lesson of finding joy and beauty in the unexpected.

#47 – Fruit! I love this time of year when all the fruit is in season! This Friday is the start of the Strawberry Festival here! Can’t wait!

#48 – Taylor is also flying in this week! So grateful he was able to get the time off to join me!

#49 – I’m sure I’ve already said this but I’m just so grateful that I get to spend my summer in such a beautiful place with my dogs and sisters!!

Back in Texas 😭
Well, I’ll be back. 🏔
“For the benefit and enjoyment of the people.”
Glacier was dope.
Another perfect week in Idaho. #notjustpotatoes
So Idaho was pretty great. 🏔🐕🐩